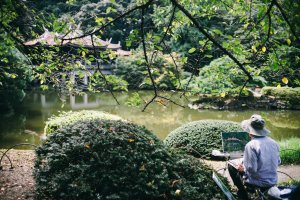 Shinjuku Gyoen is one of the largest and most popular public gardens in Tokyo. Located a short walk from the popular Shinjuku neighborhood, the park is particularly renowned for its seasonal display of cherry blossoms.

Shinjuku Gyoen was constructed on the grounds of the former residence of Lord Naito, a daimyo (feudal lord) from Shinshu Province (current day Nagano Prefecture). The site was created as an Imperial garden in 1906, but was later reopened after World War II as a national garden, for the enjoyment of all the nation’s citizens.

Shinjuku Gyoen combines three very unique styles – a Japanese garden, a formal garden and a landscape garden. The Japanese garden is home to the Kyu-Goryo-tei, or Taiwan Pavilion, which was constructed for the wedding of the Emperor Showa. This section of the park also hosts a two-week chrysanthemum festival every November. The formal garden was designed in the French style and is best known for its profusion of roses in spring. The landscape garden draws inspiration from the manicured lawns of English gardens and features sweeping open spaces and glades of cherry trees.

Though Shinjuku Gyoen is lovely in any season, the garden really shines in the early spring with the blooming of Japan’s iconic cherry blossoms. Over 1000 trees of a dozen different varieties dot the grounds, meaning that even visitors to Tokyo outside of the main blooming period are likely to find a few trees still in flower in the park. The profusion of trees and the wide-open spaces also make this one of the city’s best-loved spots for a hanami (flower viewing) picnic in the early spring. With a ban on the public consumption of alcohol in the park, this is a particularly popular option for family hanami outings. The Prime Minister even holds his official cherry blossom picnic on the grounds of Shinjuku Gyoen.

Admission to the garden was recently raised, with adult ticket prices now at ¥500. Those who anticipate visiting the garden several times through the year can purchase an annual passport for ¥2000.

Located right next to the vast Shinjuku Central Park, THE KNOT TOKYO Shinjuku is a modern boutique hotel with convenient access to nearby Shinjuku Station..

Dai-ichi Hotel Tokyo Seafort is part of the Hankyu-Hanshin luxury hotels group. Since 1938, this luxury hotel has been opening its doors to guests who..

Located right outside Meguro Station, this is a restaurant where you can eat the fish you catch yourself in one of the two tanks. Serves all kinds of..

Opened in March 2018, the Pokemon Cafe in Nihonbashi is the series' latest permanent character cafe in Tokyo. The cafe and adjacent Pokemon Center..

The highball is a popular drink for both men and women. The diverse selection of highballs at this specialized bar will make your night magical.

The venue for the gymnastics and water polo competitions during the 1964 Tokyo Olympics, the Tokyo Metropolitan Gymnasium continues to be an important..

Olympic fever is building in Tokyo! Preparations for the 2020 Olympic and Paralympic Games are well underway. One of the most important venues will be..

This huge park in the heart of Tokyo is known for its various sports facilities. However, it also offers many other attractions for visitors of all ages...