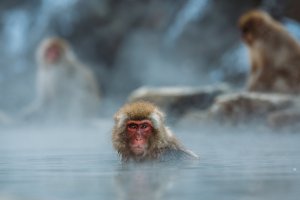 Jigokudani is famous for its hot spring-loving macaque monkeys. It’s the only place in the world where wild monkeys bathe in hot springs. Located at an altitude of 850 meters in Nagano prefecture, the steeps cliffs and steam rising from the hot springs is how Jigokudani earned its name, also meaning Hell Valley.

The severe environment of ice and snow—buried for one third of the year—is home to the Japanese macaques or snow monkeys. The monkeys have turned this frozen and harsh place into their own paradise and since 1964, when the monkey park was opened, it’s been a popular place to watch the monkeys bathe in the hot springs.

The monkey park was created by Sogo Hara, an employee of the Nagano Electric Railway. He observed that as the habitats of the monkeys shrank due to increasing ski resorts and lifts that the monkeys often invaded and raided farms down the mountain. As they became known as pests, farmers began to hunt the creatures—until, at last, the monkeys were found in a hot spring resort for people.

Once photographed, they became a worldwide phenomenon. Hara had his ticket to saving the monkeys’ natural habitat. The manmade hot springs of Jigokudani Monkey Park are fed by natural sources and provide the monkeys—and guests—with enjoyment. The monkeys are uncaged and unfenced, free to roam and be in their natural environment. The park is first and foremost a conservation area. Guests are not allowed to feed the animals as it disrupts the balance and makes the monkeys too reluctant to return to their natural habitats at night.

Thanks to the park staff feeding the monkeys throughout the year (though not enough that the monkeys become reliant) the cute little macaques can be found near the hot springs any time of year. Visitors can delight in watching the macaques go through their daily rituals such as grooming, eating, and socializing. It’s a truly special place to be able to see this unusual red-faced monkey troop.