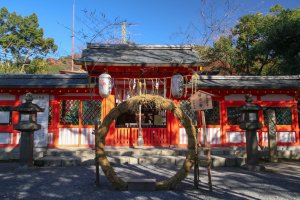 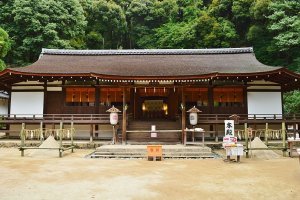 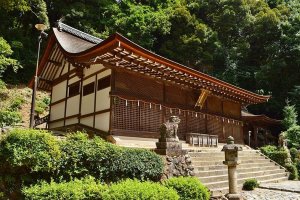 Located in Uji, the city renowned for green tea, Ujigami shrine is Japan’s oldest existing shrine. Among the country’s thousands of shrines, Ujigami shrine was one of the first — allegedly built during the year 1060. Although the shrine is rather off the beaten track, its convenient location makes it easy to combine visits with nearby Byodo-in Temple and Uji-gawa Shrine.

Ujigami-jinja’s grounds are quiet and serene, located away from the bustling tourist attractions in central Kyoto. It was originally built to honor Emperor Ojin and his sons, after one of the princes committed suicide in a selfless effort to solve the dispute over imperial succession. Now, Ujigami shrine also serves as the guardian shrine for Byodo-in Temple.

Visitors to Ujigami-jinja will also notice the abundance of rabbit motifs. The puzzling presence of rabbits is related to a myth about a divine rabbit that guided the lost prince back to town. Since then, the rabbit has been honored in the form of figurines, omikuji and more in the city of Uji.

The temple’s springwater is said to have special qualities, making it the best choice for use in traditional tea ceremonies — rated to be among the 'Seven best waters of Uji'. Its main Honden building is also believed to be the oldest remaining example of nagare-zukuri-style architecture. Being host to such historically significant sites, it is no wonder that Ujigami-jinja was designated a UNESCO World Heritage Site in 1994.

Built in the late Heian period (794 - 1185), the honden building in Ujigami-jinja is especially unique due to its old nagare-zukuri-style architecture. It is one the oldest remaining examples of nagare-zukuri design, its distinctive feature being the three inner shrine structures being built side-by-side with the largest in the middle. Despite being made entirely of wood, it has survived almost a thousand years without being damaged by fire or man-made disasters.

Tatezuna are the large conical sand mounds sitting at the entrance of the Haiden building, where devotees come to offer money and pray to the shrine gods. The sand mounds are said to represent sacred mountains, and are built to ward off evil and protect the site.

Byodo-in Temple is one that all Japanese people have seen — on the back of a 10-yen coin. The Buddhist temple is most well-known for the view of its..

Established in 874, Daigo-ji Temple is one of Kyoto’s most scenic religious sites. The mountainside temple grounds make it a prime spot for both sakura..