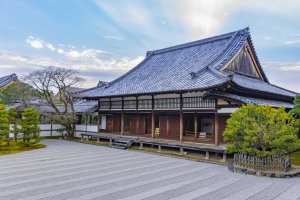 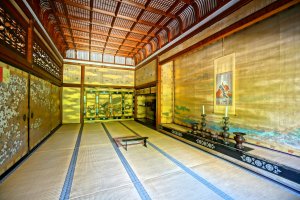 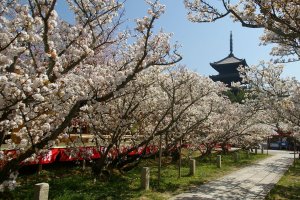 Established in 888, Ninna-ji is a temple of great importance — being the head temple of the Omuro school in the Shingon sect of Japanese Buddhism. Ninna-ji Temple is known not only for the building itself but for its prime location as a late cherry blossom viewing spot.

The temple is home to a host of Omuro Sakura trees, which are the latest blooming cherry trees within Kyoto. Other varieties include Somei Yoshino cherry trees and the ever-popular weeping cherry trees that are located outside the bell tower. Visitors often flock to the area to catch the last glimpse of spring before the short-lived blossom season ends.

Ninna-ji is one of the lesser-known temples within Kyoto, despite its well-deserved status as a UNESCO World Heritage Site and Historic Monument of Ancient Kyoto. Back in 1467, the temple was ravaged by fire and destruction during the Onin War. Thankfully, it was rebuilt around 150 years later, by Kakushin Hosshinno and Tokugawa Iemitsu, and has since been meticulously preserved to this day.

The expansive temple grounds also include an impressive Japanese garden, from which the five-storied pagoda can be seen in the background. Visitors to the temple can also partake in the Omuro Pilgrimage — a two-hour hiking course similar to the spiritual Shikoku Pilgrimage.

The Omuro variety of cherry blossom trees are loved for their uniquely short stature as well as their late-blooming nature. The Omuro trees only grow up to a height of around 2-3 metres tall, resulting in some people calling them “dwarf cherry trees”. Alas, their short stature only adds to their charm — as many flock to Ninna-ji to savor the last views of the sakura for the year.

The Goten building used to serve as a place of residence for the head priest. It was designed to resemble an imperial palace, accented by beautifully-painted sliding doors and the surrounding pond and traditional garden. From the Goten’s garden, you can take in the picturesque view of the five-storied pagoda set amongst lush foliage and the crystal clear pond.

Ryoanji Temple is home to Japan’s most famous Zen stone garden and one of Kyoto’s most iconic scenes. Believed to be built back in the Muromachi period..

Kinkakuji is widely known as the Golden Pavilion and is a three-story Zen Buddhist temple in northern Kyoto. Built during the 13th century, Kinkakuji..

Nijo Castle is one of the most accessible UNESCO spots in Kyoto, being just a short walk from Nijojo-mae Station. The former residence of the Tokugawa..