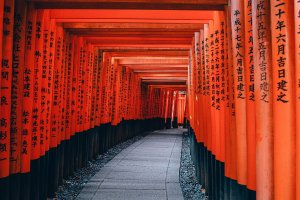 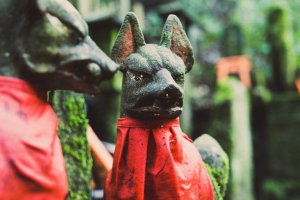 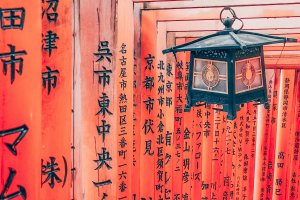 Fushimi Inari, officially known as Fushimi Inari Taisha, is a beautiful Shinto shrine in south Kyoto famous for its thousands of vermilion torii gates and fox statues. Fushimi Inari Shrine, or Oinari-san, is the head shrine of all 30,000 Inari shrines in Japan.

The shrine was founded in 711 and has since attracted a wealth of visitors⁠ seeking to pray for prosperity—not to mention catch a glimpse of the aforementioned tunnels of red torii gates⁠.

Conquering the full 12,000 steps to get to the main shrine could be seen as a suitably arduous task for those seeking their wishes to be granted.

Although it is common to stop at the halfway point where popular omikuji (fortunes) and omamori (amulets) are sold, it is possible to explore the whole shrine grounds.

Over ten thousand torii gates can be passed through and hiking the full course can take two to three hours.

If you don’t have the time (or energy) to spare on a full hike, why not travel up to one of the checkpoints and enjoy a bowl of Kitsune Udon (fox udon) or Inari Zushi (fox sushi).

Both dishes are made with aburaage, fried tofu, which is said to be a favorite food of foxes. They make for a great meal and replenish your energy for the remaining hike.

This is the goal of most visitors to Fushimi Inari Shrine. Located about 45 minutes up the mountain, this intersection features some fabulous views of Kyoto on clear days. Many hikers decide to stop here as there are fewer and fewer torii from this point on.

Foxes are seen as the messengers of Inari, Shinto god of rice; the stones foxes seen around the shrine are even called Inari as well. Many of them have a key in their mouth which depict keys to granaries blessed by Inari.

Every torii you pass by has been donated by individuals and companies, with their names inscribed on the back of each one. Prices start at around 400,000 yen for a small gate and go over one million yen for a large gate.

Sanjūsangen-dō is a Buddhist temple of the Tendai sect in the Higashiyama district of Kyoto, Japan. The temple was founded in 1164 by Taira no Kiyom..

Toji Temple is one of the original three Buddhist temples that were allowed to be built in Kyoto at the beginning of the Heian period (when Kyoto replaced..

Kiyomizudera, or Kiyomizu Temple, is a famous temple on the edge of the Higashiyama district of Kyoto. The temple, whose name translates to “Pure..