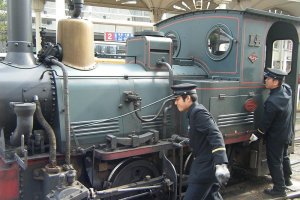 When you mix one of Japan's most lauded novelists and trains you get two of Japan's most sought-after pastimes in one. Literature and transport. "Botchan" is one of Natsume Soseki's most-loved novels which focuses (in a fictional sense) on his time as a teacher in Matsuyama in Ehime Prefecture. Novelty trains can be seen across Japan but the Botchan train carries so much history and adoration that it ranks, easily, as one of Japan's best train experiences.

For ¥800 (adults) and ¥400 for kids it’s easy to take a ride from Matsuyama City Station to Dogo Onsen Station and enjoy the atmosphere of a train that ran from 1888 for 67 years. The current incarnation, although a replica, is impressive and well worth the opportunity to return to times gone by. Matsuyama City also plays host to the Botchan Train Museum which is another reason to visit the magical prefecture of Ehime.

Most may not expect to find a French-style villa below Matsuyama Castle, but the elegant structure offers some respite from the bustling urban center..

Matsuyama Castle is a flatland-mountain castle that was built in 1603 on Mount Katsuyama, whose height is 132 meters, in Matsuyama city in Ehime Prefecture.[Wikipedia]..

Thought to be at least 1000 years old, Isaniwa is one of Japan’s three shrines dedicated to the deity Hachiman. After climbing a long stretch of stone..